Trevor Tuttle graduated in 2019 from Willow Canyon High School with a standard high school diploma and the International Baccalaureate Diploma. The IB Diploma is a rigorous two-year diploma where students are required to test in six different classes, write an extended essay, complete a course in Theory of Knowledge, and complete 150 hours in creativity, action and service. “Trevor is the typical IB Diploma candidate,” says IB Coordinator, Dr. Jason Ward. “He is the rule, not the exception. Most of our IB Diploma earners enter the university of their choice with plenty of public and private scholarships packaged with up to 24 credits that save students and their parents considerably in tuition dollars.” Dr. Ward took the time during the 2021 graduation week to sit down with Trevor and interview him as to his perceptions of the IB education he received. This interview comes two years after he graduated from high school allowing him to give an accurate and thoughtful reflection of what the IB Diploma really meant to him.

What is your greatest memory from your International Baccalaureate education at Willow Canyon High School?

In studying for our exams, some of our teachers would hold a group study during class or outside of school. In the event where they did not, students would instead hold something together in order to study. While we were studying, we also realized that we were a little stressed and so we would joke around and try our best to enjoy that time together. The IB Program is small so most everyone is pretty close and everyone knows each other, and this even applies a bit to the relationships with teachers.

What was your favorite aspect of the IB Program?

Looking back, I believe that the college level courses were the greatest part of the program. I learned high level material that was almost repeated to me in some of my college courses, but I also got experience in writing and taking exams at a college level. For example, the Extended Essay seemed like a huge undertaking but all of my extensive research papers that I have had to write while in college used those same skills, and since I had the experience, this was something that I did with ease. I think the CAS project was also a great aspect because it makes some of the active and social things that students want to do something that they need to do. While it is not on the same scale as a Capstone Project, it also prepares students for the Capstone Project that they will need to complete. A Capstone is a project that students complete in their junior or senior year which takes everything that they have learned in their courses, and they must apply it. For my Honors Capstone, I am in the middle of shooting a feature length documentary film using state-of-the-art equipment provided to me by the school.

What other activities did you participate in while in the IB Program?

While in the IB Program, I also participated in the National Honors Society, Willow Canyon’s Media Club, and the SkillsUSA chapter. In two of those clubs, I held an officer role. I also was involved in sports broadcasting for football and basketball.

Some may think that to participate in a program like IB, you have to give up everything else. How was your social life impacted as a result of your IB education?

IB feels like a lot of work and can be a little daunting, but while I was in the IB program, I was actually more social than before. I am not a social person but during this time, I hung out with friends a few times throughout the year, I attended both homecoming and prom, and many of the sports games. I had plenty of time to attend all the clubs I went to, and a lot of time to spend playing video games with my closest friends online after school. Currently, I created and I am running the first SkillsUSA chapter at NAU, working for the NAU Engineering College in Marketing,  all while taking 19-23 credits a semester. I have had plenty of time to go out and hang out with friends or spend time alone playing video games. Through IB, I learned how to manage my own time and workload in high school.

My grandmother used to say “proof is in the pudding.” How did the IB diploma impact you (whether positively or negative)? In other words, was it worth it? If so, how? If not, how not?

The IB diploma was worth it both for the credits that you can receive from taking the tests, but also for the ability to do a lot of rigorous coursework. Going into college, I received 19 transfer credits. I received two credits for English, six credits for two film classes that I did not have to take later in college, three credits for psychology, and eight credits for Spanish. As a film student with a minor in psychology, this definitely helped speed up my college career, but I also received plenty of credit for transfer classes. For example, while many people may not be studying a foreign language in college, some colleges require you to take a certain amount of foreign language. In the NAU Honors College, you are required to take two foreign language courses, something that was fulfilled by my IB credit. Another way in which IB impacted me was in regard to how much I could handle in my coursework. I know at the time, many of us were a little stressed in high school with IB, but once I got into college, my advisor told me that I was going to be taking 6 classes a week for a total of 16 credits. I told my advisor that I wanted to take 19 credits because after being in IB, taking less classes felt like I was getting it too easy. As of now, I have taken 18-19 credits a semester with ease and a 4.0 GPA in Honors. This last spring semester, I took a total of 21 credits, and this fall I will be ending my undergraduate career by taking 23 credits. Through my time in the IB Program, I learned how to manage my time, how to study effectively, and how to deal with stress, letting me take more credits than other college students around me. At NAU, I did receive the Lumberjack Scholars Award, meaning that my tuition was paid for. However, I still had to pay for housing which costs about $3600 a semester, around $1,000 in fees, plus expenses like food and school supplies. I will be graduating a year and a half earlier than my expected graduation, meaning I am saving at least $14, 000. With that being said, I do not use the meal plans on campus, saving some of the cost as well. NAU offers an IB Scholarship, but since it only covers tuition, I was not eligible since I received the Lumberjack Scholars Award. Overall, it was extremely worth it. Not only did I feel prepared for college level courses once I began my college classes, I also was told that my writing and other academic skills were a higher level than the level of classes I have taken so far. While writing research papers, I have been told that my writing reflects the 400 level or graduate level writing rather than the writing of a junior. I have also received an Honors Best Paper Award from the NAU Honors College for an essay that I had written in one of my Honors classes. In my film classes, I was with students who were touching cameras for the first time in their lives, while I was able to do everything the professor wanted without listening to the lecture. I was able to pick up important life and academic skills, skills related to specific courses like English and Film, and I was able to save thousands in the cost for my college education.

All things considered, would you do it again? Explain.

There is absolutely no part of me that could say no to this question. Knowing what I know now, I never would have doubted being in the IB Program. For a brief time, I figured that it was not going to help me as much as others talked about, but after entering college, I realized that I was instead helped more than I think most others expected. I do not think that I would have the grades, the social life, the work life, or the academic career that I currently have without that experience and time that I have spent in the IB Program.

What advice do you have for parents and students considering the IB program?

IB feels like a lot of work and that the end-goal is hard to see at the moment, but it is worth it. You should definitely look at colleges and determine what credits you will get for passing the tests, as well as some of the liberal arts and elective courses that they may also require from students. IB prepares you for college classes in a way that puts you so ahead of the game that it is truly unbelievable. All of my teachers were extremely helpful and people who I respected and got to know a little more on a personal level. The cost can be a little intimidating but nothing compared to the cost of one semester in college. IB was definitely the greatest decision I probably made in high school and is one that has paid off so unbelievably for me.

The International Baccalaureate Program (IB) courses are offered exclusively at Willow Canyon High School and challenges academically talented students to reach high levels of achievement in a broad range of subjects and allow two different participation tracks: IB diploma and IB certificate. The International Baccalaureate Organizations Diploma Program is a demanding pre-university course of study that leads to examinations. IB schools have earned a reputation for rigorous assessment, giving IB diploma holders access to the world's leading universities. Students can apply for the IB program for their junior and senior years.  If any parent or student has questions regarding the IB Diploma, please reach out to Dr. Ward directly by emailing him at jason.ward@dysart.org. 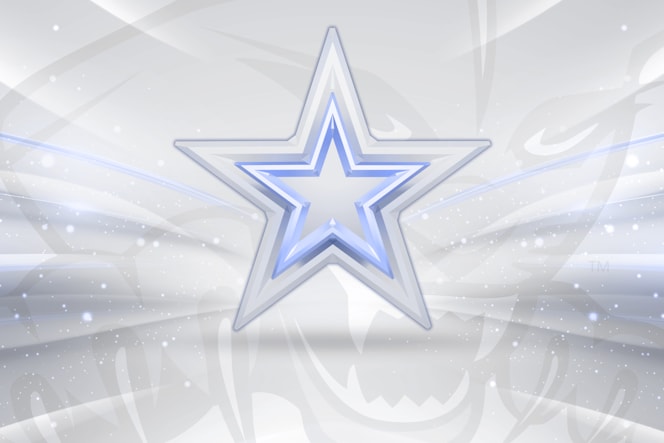 Willow Canyon Earns an “A” Rating 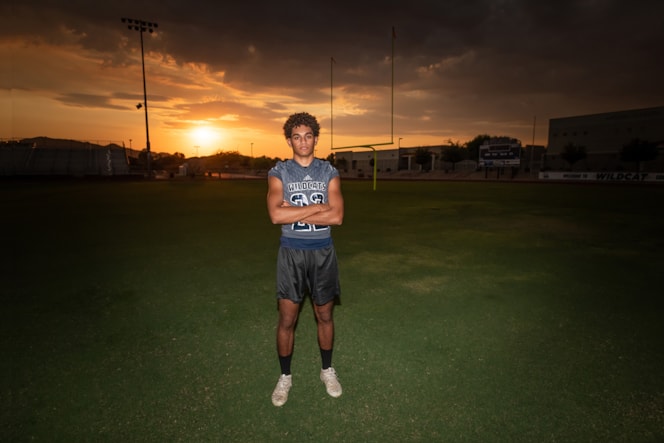 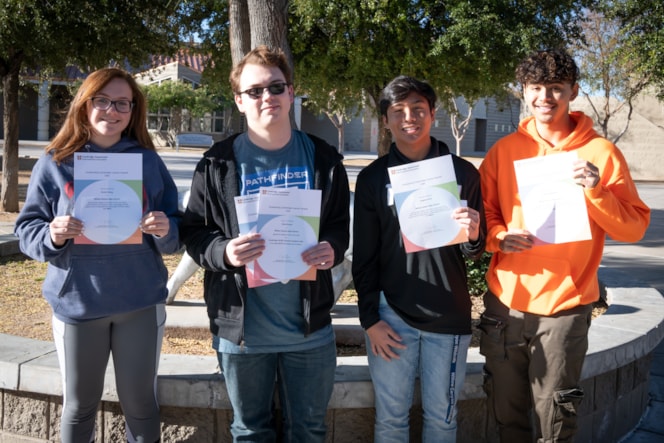 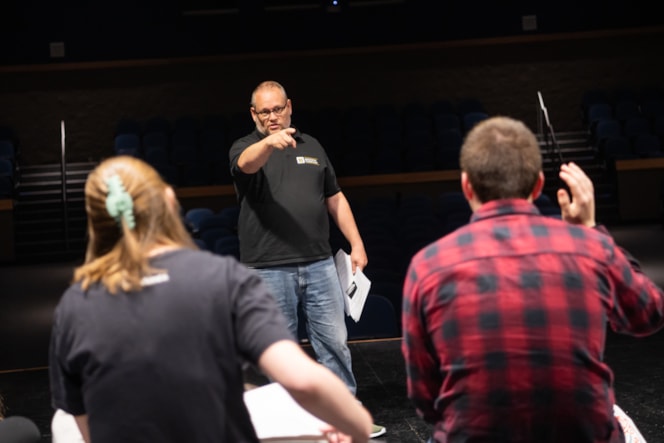